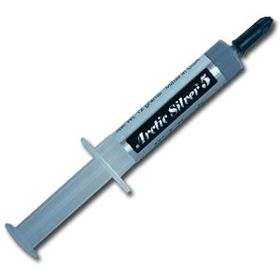 Controlled Triple-Phase Viscosity
Arctic Silver 5 does not contain any silicone. The suspension fluid is a proprietary mixture of advanced poly synthetic oils that work together to provide three distinctive functional phases. As it comes from the syringe, Arctic Silver 5's consistency is engineered for easy application. During the CPU's initial use, the compound thins out to enhance the filling of the microscopic valleys and ensure the best physical contact between the heat sink and the CPU core. Then the compound thickens slightly over the next 50 to 200 hours of use to its final consistency designed for long-term stability. (This should not be confused with conventional phase change pads that are pre-attached to many heat sinks. Those pads melt each time they get hot then re-solidify when they cool. The viscosity changes that Arctic Silver 5 goes through are much more subtle and ultimately much more effective.)